Car manufacturers are faced with increasing demands in terms of emissions. Various solutions are being developed for this, without, for example, affecting the car’s power. However, these developments also have disadvantages. Internal pollution is an example of this. The particulate filter, the EGR valve and the turbo, among other things, become heavily polluted, because the exhaust gases pass through the circuit several times before they are emitted.

Below you can easily see which topics are covered in this blog:

What is a particulate filter good for?

The fine soot particles are filtered and collected temporarily. After about 1000 km of driving, the filter will be full of soot and the soot must be removed.

This is done by burning it, also known as “regeneration of the particulate filter”.

Soot only burns at about 550 ° C and that temperature is in principle not reached in a particulate filter. For that reason, some brands add Eolys to the fuel via a separate tank under the car. Eolys is a cerine-based liquid that lowers the combustion temperature of soot from 550 ° C to 450 ° C. Other brands inject extra diesel fuel so thatthe temperature in the filter is increased to 650 ° C, which will burn the soot.

The signal is measured in the differential pressure sensor and passed to the computer. This is programmed in such a way that, based on this information, regeneration will take place at a certain pressure difference.

Causes of the fault light are on

As mentioned, the differential pressure sensor transmits a signal to the computer. On the basis of this signal, regeneration may or may not take place. Regeneration will only take place under certain conditions. For example, the car has to drive above 70 km / h for a certain time to start the regeneration process.

For people who drive a lot of city traffic / short distances or are often in a traffic jam, the regeneration conditions may not be met. The result is a build-up of soot in the filter and at some point the fault light will come on with the message that there is an exhaust gas problem.

All these causes mean that there is no automatic regeneration and it is clear that then a problem arises and the malfunction light comes on. The garage can then do a forced regeneration with their diagnostic device and get the filter clean again.

In addition, there are also additives available with “cerine” in them that lower the temperature at which soot will burn. However, if the car is not or hardly on the highway or there is a problem with the differential pressure sensor, the question is whether that helps a lot.

What is also important to know is that, during regeneration, the soot is burned, but that there is always a little ash that sticks to the wall of the soot filter. After about 150,000 km, this accumulation of ash residues can cause the particulate filter to become clogged too much and the engine failure light to come on.

A particulate filter that slowly fills with ash residues will have to regenerate more often. After all, the space in which the soot can be collected is getting smaller. This is therefore noticeable because regeneration is much more frequent, sometimes already with 350 km.

EGR valve: function and problems in relation to the particulate filter

The EGR valve (exhaust gas recirculation valve) ensures that part of the exhaust gases are led back into the combustion chamber. The goal: to reduce the emission of harmful nitrogen oxide (NOx).

And that’s the only reason an EGR valve is mounted. The engine does not perform better, the consumption does not decrease (on the contrary) and because the exhaust gases are greasy, they build up in the valve itself, the inlet channel and the particulate filter. Because the exhaust gases precipitate and build up in the various parts, they will eventually cause problems.

The EGR valve itself will not open and close as well due to this contamination. The result: more exhaust gases that are returned to the combustion chambers than desired. That is a vicious circle because the EGR valve will pollute even more and faster. The inlet channel will also silt up, so that even less oxygen is drawn in and finally, more soot will also enter the soot filter, which clogs the soot filter.

As said, if the engine functions well and there are no problems with the differential pressure sensor, for example, the particulate filter can last a long time, about 150,000 km on average. The reason for having to replace (or have it cleaned) the filter therefore only relates to the accumulation of ash residues.

However, the more soot that needs to be burned, the sooner the soot filter will fill up with ash.

There are a number of additives on the market that can be used to prevent pollution problems. Lindemann Diesel Boost, for example, is a perfect cleaning and protection additive for the fuel system and it will also protect the turbo, the EGR valve and the particulate filter against internal pollution. Lindemann’s Diesel Boost is easy to add to the fuel when refueling.

Clean the DPF yourself with an additive 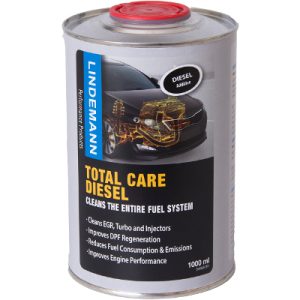 Prevention is always better than cure. However, sometimes it is already too late. If this is the case, Lindemann still offers a solution. With the Total Care Diesel from Lindemann you can thoroughly clean the entire intake and exhaust system, the particulate filter and the EGR valve yourself.

This powerful cleaner removes stubborn dirt and carbon deposits from the EGR valve, turbo, injectors, pipes, inlet and outlet valves and the diesel particulate filter (DPF). This product is unique on the market due to the high concentration of active substances and the versatile effect. In short, a top product for cleaning the entire diesel system! The Lindemann TCD is the best and cheapest solution.

Want to know more about cleaning the particulate filter with an additive yourself? Please contact us without obligation. We are happy to assist you. Want to buy Lindemann Total Care Diesel directly? Continue to “Order Now!”.